Iannis Nikou (Thessaloniki, 31st May 1943) is one of the most important Greek painters of the 20th century and main representative of Magic Realism. In his painting, the artist has developed a personal and recognizable identity by adding Surrealistic characteristics – influenced by the first period of his work (1970- 1990) to the magical and multifarious world that he has created. 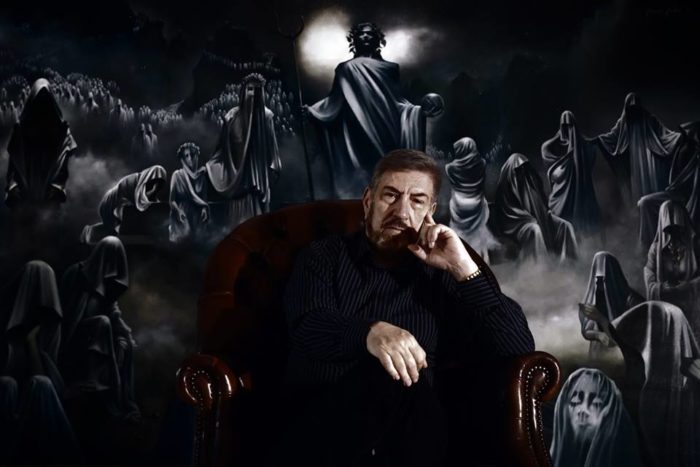 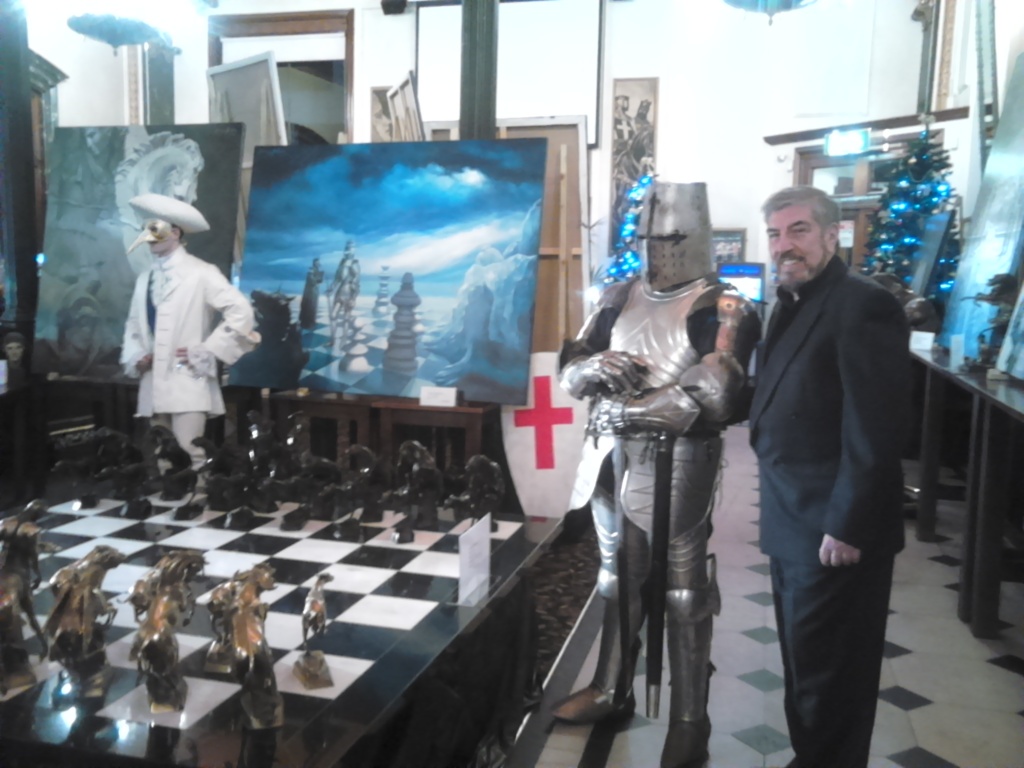 Iannis Nikou was born in Thessaloniki and grow up in Athens. His mother Niovi Poliadi was painter as his English-Irish grandmother (she was descended from the Houses of Southgate and Courtney), too. At the age of 12 he started painting and from 1965 to 1970 he studied painting at the Athens School of Fine Arts where he had teachers G. Mavroides, N. Nikolaou and Y. Moralis in painting and E. Voila in the art of mosaic. At the same time, he attended the Athens School of Theatre and Cinema where he studied acting and scenography. During this period, he completed his classical guitar lessons with Th. Orfanidi He also worked on frescoes and did scenery and costumes for theatrical productions. In 1981 he met his future wife Aimilia Christiana Vasilopoulou (1950 – 2019), who in addition to being a partner was his source of inspiration and muse.

During the period of 1985 – 1990, due to professional obligations of his wife, he settled in Genoa, Italy, where he awarded for his work by the Umbria Region and the Ministry of Tourism, and in 1987, the International Art Committee of Lugano bestowed on him the title of “Magister” included him in the special edition of “Protagonists of Italian Art”. In 1988 he took part in the 7th European Biennale, in Rome, where he won the Drawing prize. In the same year, he was also awarded by a special UNICEF price. His exhibition at the Palazzo Spinola (Genoa, 1987) was particularly honorable, where exhibited for the first time a non-Italian artist. 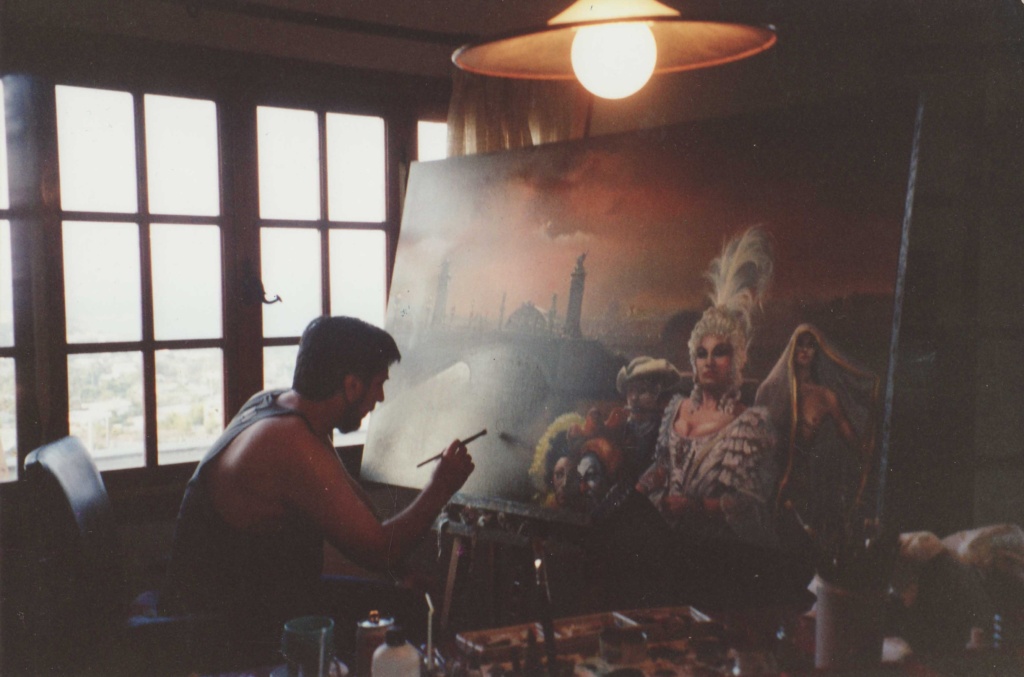 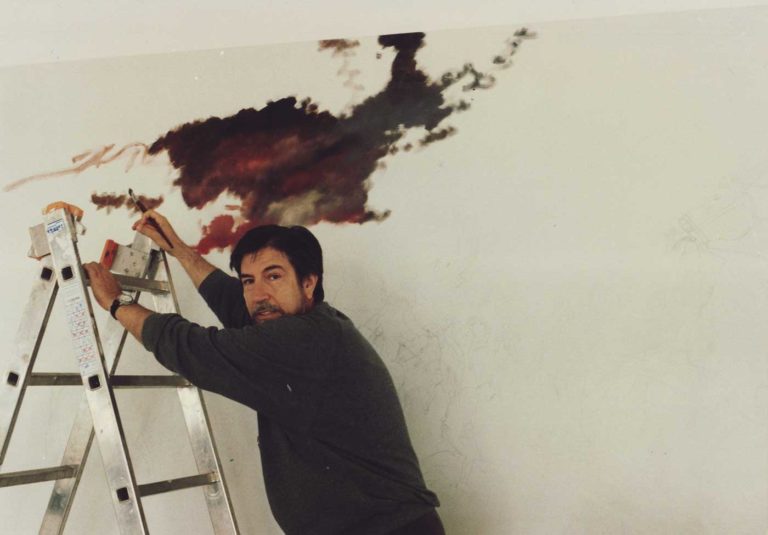 In 1982, following a competition, he was chosen to represent Greece in the E.E.C. exhibition entitled “150 Young Painters of the Community”. In 1984, the cinema director Dimitris Arvanitis, presented the work of Iannis Nikou in the film “Surrealism in Greek Painting”, which won the first prize in the short classification, at the 25th Film Festival of Thessaloniki. He has, so far, presented his work in many solo exhibitions, in Athens, Thessaloniki, Brussels, Milan, Brescia, Genoa, Rome, London, Nicosia, Toronto and in many other cities in Greece and abroad. He has also participated in group exhibitions in Basel, Paris, Spoleto, Todi, Rome, Turin, Savona, Malta, New York, Toronto, Antwerp, and Nicosia.

His work is mentioned in dictionaries and art books while his paintings are exhibited in art Museums and private collections in Greece and abroad.

In his work we meet a particularly unusual, for the art scene, large thematic divided in units called Cycles, which are created chronologically in parallel. Therefore, they don’t constitute different artistic periods of the artist. These Cycles are the Paganistic – Allegorical Cycle, the Historical Cycle, the Biblical Cycle, the Mythological Cycle, the Medieval Cycle, the Romantic Cycle, the Modern – Abstract Cycle, the Portraits and finally the Drawings with Pencil. 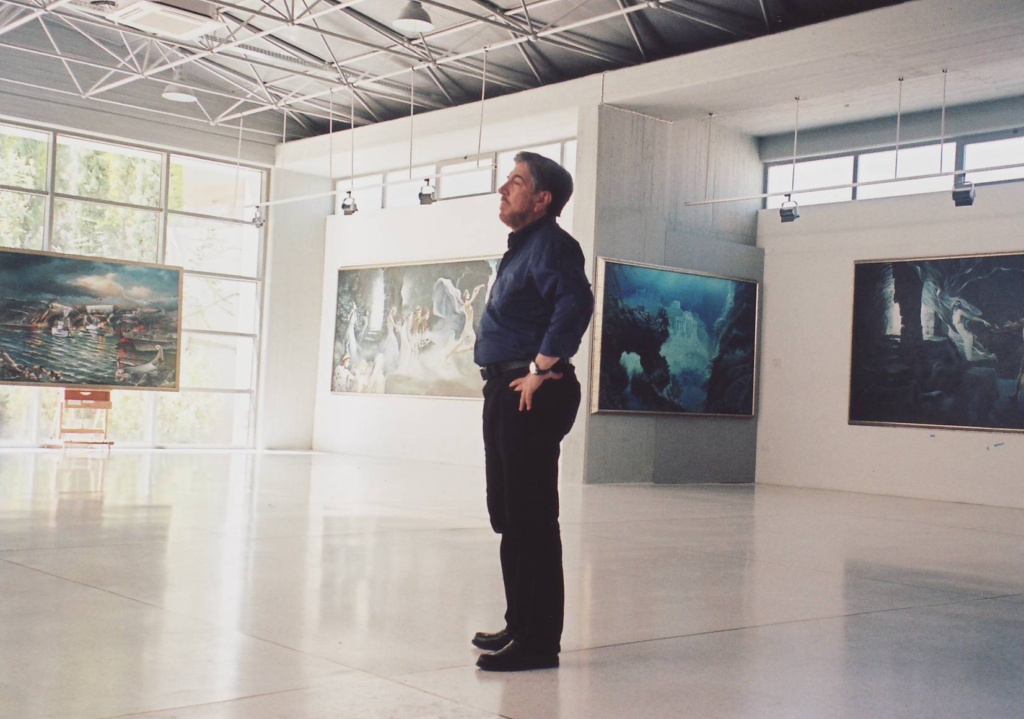 He returned from Italy to realize his dream: escape from the city and live-in nature. In his wanderings around Greece, he discovered what he considers an ideal region, the nature of Macedonia. There, in north Drama, he created his own space, where he lives and paints in ideal conditions with his family.

Make an appointment and see the unique works of Iannis Nikos up close.

His unique works come to life!

Read More
We use cookies on our website to give you the most relevant experience by remembering your preferences and repeat visits. By clicking “Accept All”, you consent to the use of ALL the cookies. However, you may visit "Cookie Settings" to provide a controlled consent.
Cookie SettingsAccept All
Manage consent