The Forth Horseman of the Apocalypse
the allegory of Death

“When the Lamb broke the fourth seal, I heard the voice of the fourth living creature saying, “Come.” I looked, and behold, an ashen horse; and he who sat on it had the name Death; and Hades was following with him. Authority was given to them over a fourth of the earth, to kill with sword and with famine and with pestilence and by the wild beasts of the earth. (Revelation 6:7–8).

The fourth horseman, on the deadly pale horse, is the personification of Death with Hades following him, receiving the victims slain by Death. Its commission was to kill the 1/4 of earth population with sword, famine, pestilence and wild beasts .

Babylon and the beast of Apocalypse

The Third Horseman of the Apocalypse
-the allegory of famine 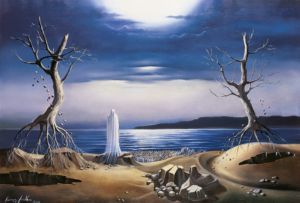